A little book-review of ‘After Man: A Zoology of the Future’ by Dougal Dixon. Strangely, this book took me longer to read than some novels, despite being a picture book without many words. I suppose this book just really lets the imagination fly-off and doesn’t have a narrative to keep focused on for momentum. 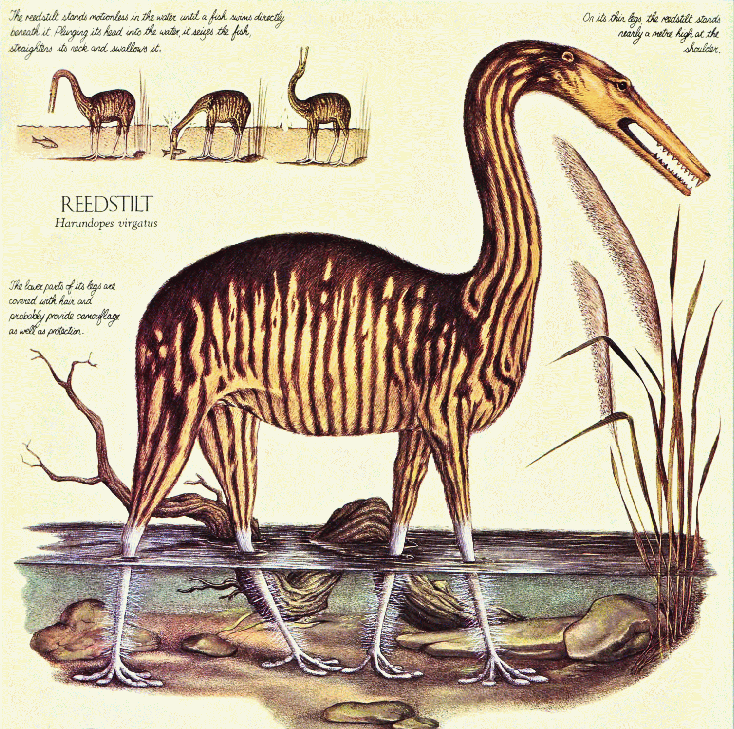 The Reedstilt: Moles of the future?

After Man is Speculative evolution picture-book: imagining what animals could exist 50 million years in the future, long after humans have gone extinct. This is not meant to be read as a serious prediction of how things will go, but plays with possible ideas and presents them as facts from the perspective of a narrator living at that time.

In this world rabbits and rats (which humans considered invasive pests and vermin) have thrived, respectively becoming the dominant herbiviorous and predatory animals. Since so many hooved animals (like cows) had become dependent on humans, deer-like decendents of rabbits (“Rabbucks”) have evolved to fill the herbivore niches instead. The changes in prey and general chaos brought the specialised carnivores (such as wolves and lions) into decline, making space in those niches for antifragile omnivorous rats. The new “Predator Rats” have grown huge, hunting Rabbucks in dog-like packs, replacing their old gnawing incisors for sharp stabbing ones.

Convergent evolution (like the deer-esque rabbits) is a running pattern throughout After Man. My favourite examples are the Pelagornids, fully-aquatic descendents of Penguins: joining the imitating fish-shaped ranks of icythosaurs (reptiles) and whales (mammals). Among the Pelagornids is the Vortex: a huge whale-like filter-feeder. Typically, images of familiar-looking creatures turn out to have a very different ancestry when you read the text, and on closer inspection carry some interesting remnant features.

However, not all creatures depicted trace familiar paths, some, like the Reedstilt (my favourite, the one on the cover), are very exciting and novel. There are giant killer flightless bats too (like Primeval but 26 years earlier). All of the future forms are supposed to be possible and demonstrate evolutionary processes similar to non-fictional cases. There are very memorable examples of mutualistic relationships between species and of extreme sexual-dimorphism. After Man goes into plenty of detail on explaining why the animals evolve the way they do, bringing in many factors including the future landmass motions and mountain locations via plate tectonics. As the book states: evolution is vast multi-dimensional dynamical system of which we only see a cross-section at any set time; an examination of how the environment has changed between our time and the 50My future is essential to understand why the creatures are as they are.

Sometimes the thorough environmental explanations come at the cost of thoroughly explaining the animals themselves. Each scene is split between a text page (with some picture around the edges) and a picture page (with some notes in the gaps). Each scene crams in many different species in addition to the environmental descriptions, yet sometimes a single page of explanation does not feel like enough with some descriptions being cut a little short. The pictures are absolutely lovely, by the way. Very artistic and oldschool, look painted and not like computery fake-photographs.

A few of the creatures (perhaps as a result of the brief explanations) were less convincing than others. For example: the Clatta resembles a sloth with an armoured tail, it can hang from this tail to protect itself from clawed tree-climbing Stigers. The idea is that the only part of the Clatta in reach is the armoured tail so that the Stiger is unable to harm the Clatta. Looking at the pictures makes this is very unconvincing. The Stiger is a long, agile tree-climber that reaches and swings from branch to branch: it should easily be able to reach the Clatta. There are a few other questionable examples like this, typically with animals making radical or expensive changes for insufficient benefits.

Towards the end Dixon addresses the far-future. It had been assumed that mammals and birds would remain dominant in 50My, but the far future (say, 100My or more) may be dominated by an entirely new class of vertebrate, the details of which would be difficult to imagine and impossible to predict. Dixon suggests that the far-future development of animals would depend on the future adaptations made by plant life, and includes a small image of how such plants and animals could look only for an example and without much information. This would make a very interesting topic for a future speculative evolution project. Flannimals for dinosaur-geeks!

Oh and there is also a pretty detailed summary of animal-evolution so far and the processes at work at the beginning (takes up the first quarter-to-a-third of the book). I skimmed this section but I was very impressed to see Spriggina representing the Precambrian gang. A few animals were suggested as first-appearing further forward in time than we now believe them to have appeared (such as the fish and reptiles), so perhaps the book shows its age a little bit. I’ve seen much worse before: in some of my childhood dinosaur books Stegosaurs were depicted as having their plates lying-flat as armour rather than stood-vertically for display. It will be interesting to see how our understandings and reconstructions of known prehistoric animals change in the future, and how much further back some of these groupings go. Fingers crossed we find a clear Ediacaran trilobite before long!